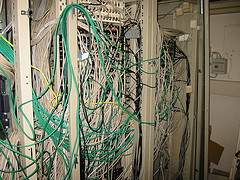 The world is going wireless. We’ve been seeing the trend for 20 years, and it’s really gained momentum in the last five. Not only do all new laptops have wifi built in, but many new desktop computers do as well. It’s getting difficult to find someone who doesn’t own a cell phone. Portable music players, such as the Zune, are getting interesting wireless capabilities. Home entertainment equipment is going wireless to prevent the mess of cables pictured over on the right. All new cars have wireless key fobs for easier entry. I could go on all day.

Not all wireless devices are a commercial success, of course. Remember the portable TVs of the 90’s? They were in every electronics store and usually had a 2″ screen. You never see one anymore. It’s because of the popularity of cable and satellite TV, and the unwillingness to settle for three channels. It is not because of the screen, I might note – geeks go crazy for tiny screens for the portability. I predict that we’ll see a resurgence of portable televisions, though in a different form. We’ll have television streamed onto portable media players through wifi or cellular broadband. And this brings us to the topic of this post.

Cellular broadband is the only commercially viable method of sending data wirelessly to the entire country. Public wifi networks only exist in a few major cities. Satellite is available, but not feasible due to cost and receiver size. Cellular networks such as EVDO and HSDPA are virtually nationwide, the new standards are coming soon, and the older EDGE and 1xRTT standards are available as fallbacks.

Think of what we could do with the cellular data networks in an ideal world. First of all, no cables. Your computers wouldn’t need network cables, your TV wouldn’t need a cable line, your online-capable video game systems wouldn’t even need a wireless router. Your cell phone or portable media player could be fully internet capable, not crippled like most current devices. Your car, house, and appliances could send you maintenance reports. You’d never lose a device again, because they’d all have GPS-like capabilities. You’d worry a lot less about stolen goods for the same reason. And these are just the basics.

So why isn’t cellular data more widespread? Because the cellular companies like their profits. Huge profits. Text messages are marked up 7314% from the data charge, and the data charge itself is marked up by an even larger percentage. The most basic data plan for a PDA from Cingular is $19.99/month for five megabytes. For comparison, I can download five megabytes at home in about five seconds, for a cost per megabyte of 0.007 cents. The first unlimited plan, not including any text or media messaging, is $44.99/month.

Quite frankly, it’s absurd, and I think it’s holding back technological progress. It seems to be another case of short-term thinking on the part of the business, and consumers lacking the information they need to make better decisions.

Maybe if more of the consumers knew they were paying a 285,571% markup for mobile data, they would have a word with their cell phone provider.