HA! HA! Teh news in cliche!

I’ve been struggling with the rehash of the news over the past couple of weeks because what has been happening around the globe has been so horrible that there really is no way to perk it up for anyone’s enjoyment. In fact, if you look at the current headlines listed on Google’s World News section, 18 out of 20 are about conflicts and killing around the world. There’s little to be happy about these days. But I think I’ve found a way to break up the seriousness of our journey – with internet cliches. Let’s get started.

Now, I can’t claim to be an expert in Middle Eastern history and/or policy, so I won’t bother trying to enlighten you with my own commentary with what I think is happening. (In short, I think most everyone out there is crazier than Tom Cruise jumping on Oprah’s couch, but that doesn’t really make for good reading.) If you’re looking to read something more intelligent than that, there are some interesting news links that I’ve found. The first is an article ABC News has written up called “What is Hezbollah“. The next is almost a conspiracy theory about what has been happening with the recent attacks against Israel. The journalist connects the dots, looking back with historic events and an interview he actually gave Sheik Sayed Hassan Nasrallah (Secretary-General of Hezbollah) a couple of years ago. It’s an interesting read: Nasrallah’s Game. I’ve seen articles claiming the Lebanese civilians are against Hezbollah, and others saying the terrorist group is gaining more support from civilians – I’m not out there, nor am I Lebanese, so I don’t know either way. Here’s an article by The Age, called “Lebanon Demands Hezbollah Disarm“. And now here’s one saying “Lebanon Army Could Join Hezbollah Fighters“. I’m sure both are correct – the government will need to respond to the crisis going on inside their border.

We break from this travesty to bring you the following important news flash: Bigfoot has been spotted in TEXAS. My guess is, now that Big Foot (or, “Wooly Booger,” as the Texans are calling him) is so old, he likes to migrate to warmer places in the winter.

And now back to the crisis in the Middle East. While Israel hints at a ground invasion and calls up 3000 from the reserves, the international community argues it out. Recently, President Bush was caught off the record, speaking with Tony Blair at a dinner. Unbeknownst to them but beknownst to us, a microphone picked up a conversation while they discussed the current crisis. After you’ve read that, pop on over to this Reuters article called “Bush Confronts Limits of Power in World Crises“. For those who aren’t really up on where the U.S. is today with who we have pissed off, and who we currently are and aren’t speaking to, this will help identify nicely how screwed we are with getting anything resolved in the Middle East, and will fill in a lot of information that came from the conversation between Bush and Blair. Oh, and here’s an article I had saved from earlier in the week from the NY Daily News, called “Israel’s last resort: After withdrawal, Hamas and Hezbollah have waged endless, ruthless war” that I saved and now I can’t remember why and I’m not going to re-read it to find out.

But before we go further, we break to bring you this important news brief: Kevin Federline is a douchebag.

Ok, that’s not breaking news but it’s always a great reminder and somehow brings order to the cosmos. Apparently, K-Fed is saying that he released PopoZao as a joke, to gain publicity. Because everybody knows that even bad publicity is good publicity. And when William Hung is better than you are, then you should release a bad song and claim it’s all a joke. Because that’s exactly how you gain credibility in the music scene. Somehow. Also, in the realm of Douchebag contradictions, K-Fed was quoted saying that he did not want Britney featured on his album because he wanted to prove that he can make it without her. Seeing as how he can’t, he’s delayed his album so Britney can appear on the record. In the article, it alludes that being featured on the album could be a bad career move for Britney. Huh. I didn’t realize that her career was currently in good standing.

At any case, the record is going to be called “Playing with Fire”, and that’s apparently the first single that he will be performing at the Teen Choice Awards, which I believe is some sort of plot to seriously scar the minds of the next generation. And unless “playing with fire” means that he’s going to die in a fire via being dropped into a vat of molten lava, I won’t bother watching anyone who has less credibility than the Icy Hot Stuntaz. 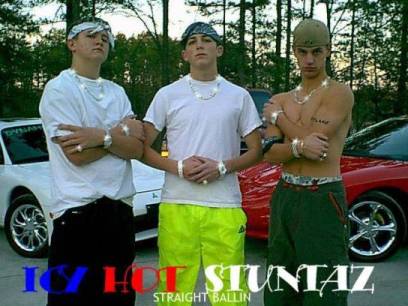 Whoa, that was a couple of cliches in one! Truly an honor for K-Fed, indeed.

And now back to the situation in the Middle East: Condi’s going to the Middle East, foreigners are being evacuated from Lebanon, and to bring North Korea back into the picture, allegedly Iranians were present at the North Korean missile tests. Gingrich says this is WWIII, and he’s not alone. Ok. I can’t talk about the Middle East any more.

Moving along, Robert Novak, the journalist who exposed Valerie Plame in his 2003 article, is now able to speak out about what went down. Here’s his interview with Fox News: “Robert Novak Breaks his Silence“.

Speaking of journalism, this year’s winner of the annual Bulwer-Lytton Fiction Contest has been announced. The contest is in honor of Edward George Earl Bulwer-Lytton’s famous “It was a dark and stormy night” opening – instead of penning the best story opening ever, they are looking for the worst. Jim Guigli cruised into the grand prize spot with this gagger:

Detective Bart Lasiter was in his office studying the light from his one small window falling on his super burrito when the door swung open to reveal a woman whose body said you’ve had your last burrito for a while, whose face said angels did exist, and whose eyes said she could make you dig your own grave and lick the shovel clean.

What he’s really trying to say is: 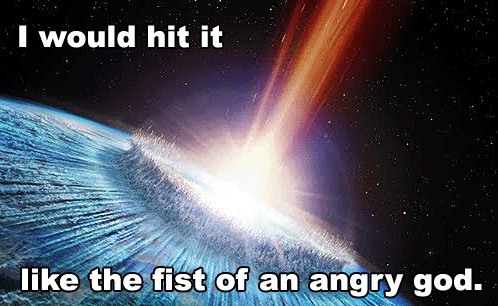 In the disgusting department, ape meat is being sold in U.S. and European markets. Apparently, it’s the new haute cuisine. When the rich aren’t sampling ape, scorpions, worms, and ants are on the menu.

Also, the Red Sea Region is parting in a massive split. Moses and Bruce Almighty unavailable for comment.

Last weekend, there was some sort of tilt with a cruise ship and a few people got hurt, and it was huge news for some reason, and everyone’s screaming about how it could have been the Poseidon Adventure. Next week, there really will be snakes on a plane.

Speaking of snakes (my God, how do I come up with this crap), someone thought it would be a hilarious-ass joke to put their 6-foot Boa Constrictor into their mailbox and surprise their unsuspecting mailman/woman.

He’s lucky I wasn’t delivering his freaking mail, because I would have jumped back into my little mailtruck and run the mailbox over. Then backed up and run it over again. When the boa was significantly flatter, my next instinct would probably be to wrap it up into a nice parcel and mail it back to the owner.

I’m not a big fan of snakes. Obvious or no?

Next stop, Russia! Vladmir Putin kisses a boy “like a kitten“. Putin tells the press about the kiss:

“I tell you honestly, I just wanted to touch him like a kitten and that desire of mine ended in that act.”

In related news, Michael Jackson was in court again. This time, it’s because he owed money to a former adviser that Jackson had fired in 2001.

Also, interestingly enough, scientists have discovered that Mammoths came in Blond and Brunette.

A group of persons who feel the spelling of the english language should be reworked are still lobbying for change to a simplified spelling, that is, “to spel wurdz the wae thae sound“.

Why in the hell are we even discussing this? Perhaps so lazy retards can have a better chance at SAT scores, I have no idea.

Ok, I cheated with this article – it appeared on Fark yesterday, but it is perfect for our next cliche: Man Sues Over Sperm Bank Hidden Camera. Here comes the cliche:

Cliches aren’t complete without that one.

In the midst of the war and disaster that has broken out across the world, something truly diabolical has arisen between New Zealand and Australia: “Australia has upset near-neighbor New Zealand with television advertisements depicting some of its rugged rugby players carrying women’s handbags.” Some people are pissed because they want their holy city back, others just want to blow other people up with bombs, and some are just vehemently against the man-bag. It’s good that we’re keeping things in perspective.

Today’s news in cliche has been brought to you by:

and the WTF Cat.